The Dodge Viper. There may not be another American car that draws a more diversified response than the Viper. Some call it ‘The’ American Exotic. Others call it a brutish unsophisticated American Musclecar. Here at DF, we try not to base our opinions off of what others say and rather just want to find out if a car is a good “Drive” or not, and there is only one way to find out the answer to that question… get in one and drive it.

For our review here, we located a 2001 Dodge Viper GTS, which is part of the second generation of Vipers (1996-2002). But we did not want just the standard GTS Viper, we wanted the best Viper for the track, which would be the rare ACR package. Beyond the ACR package, the second gen Vipers really did not have many options available, making the search a bit easier. The color of our test car is bright Viper Red without any stripes which does give it that pure blooded Viper look.

The early Generation I and II cars are still a beautiful car to look at and they look just as modern now as they did when they were new. The 18″ BBS wheels that are a part of the ACR package are beautiful, though a pain to clean, and another inch or two in diameter would fill the wheel wells better. The tires on those BBS wheels are extremely wide, 285 up front and 335 in back. The front tires alone are wider than many exotic sport car’s rear tires. But with the huge amount of torque, 500 ft-lbs @ 3600 rpm, that comes from the aluminum V10 requires as much rubber on the ground as possible. This is especially true since the raw nature that Dodge wanted for the Viper meant that any form of traction or stability control was not included. The goal of the Viper was to be pure driving pleasure with nothing coming between the driver and the car. Honestly… we love that and it is exactly what defines Driving Feel!

The ACR package was a track package that added 10 extra horsepower and 10 extra ft-lbs of torque as well as the already mentioned lightweight BBS wheels, 5-point racing harnesses for driver and passenger, and perhaps the most dramatic change, the drastically increased spring rates front and rear and adjustable race shocks. The increased stiffness of the suspension does wonders on the track, but in reality, they make the car almost unbearable on rough roads as the car crashes over every pot hole and undulation in the road. But on smooth roads… it is heaven!

The designers at Dodge always intended the Viper to have side-pipes, but due to the old school O2 sensors, the second generation Viper was not able to get the side-pipes worked out correctly so the exhaust runs out the back of the car. The Gen 2 cars are the only vipers without side-pipes, though the pipes still run in the same area down the side sills of the car, generating another Viper idiosyncrasy, the leg burning side sill that both driver and passenger need to be aware of when getting out of the car, especially after a long or hard drive. The driving position is also slightly slanted outward with small footwells to make room for the massive V10 to sit as far back as possible in the chassis, allowing the weight distribution to come in very near 50/50, with a curb weight of about 3350 lbs. Some people complain about the seating position, but for us it was no big deal and is not noticeable once you are driving.

The rest of the interior is fairly spartan with a large center transmission tunnel between driver and passenger and lots of other plastic interior pieces. The gauges are actually pretty good, all of them being white faced with black numbers. The steering wheel is a small diameter three spoke design that is comfortable and feels good, but the gear shift lever is tall with long throws. We have driven other Gen 2 Vipers with a short shifter installed and it is a better setup than how they come from the factory. The standard factory seats have good side bolsters on them and are what we would considered sport seats. They are comfortable and work fairly well on the track, though there is always room for improvement.

When driving the Viper, it is an experience. The sound while accelerating is excellent and enjoyable to listen to and the car still generates a lot of interest from bystanders. The gawkers you need to be careful about when driving down multi-lane roads as these other drivers tend to get into your blind spots to snap photos. The gearing on the car is very wide and high, in fact, 6th gear is a very high overdrive only intended for conserving fuel, and top speed is attained in 5th. A common modification is to replace the rear axle ratio with a much lower gear set, either 3:55 or 3:73 which then makes 6th gear usable. As it comes from the factory, there is essentially a 5 speed tranny when running on the track. There is plenty of torque from the V10 to effortlessly pull from low RPM’s in the various gears which does help when on the track or carving a back country road.

The steering feel is excellent with a fast steering ratio and the BF Goodrich g-Force T/A KDW tires provide excellent grip, even on the dusty track in Helena. The .90 G reading was severely limited by the dusty asphalt used for the skidpad during our tests; this became even more evident as the Viper ACR routinely pulled over 1 G on three of the 8 turns on the road course. The handling limits of the car can be felt through the steering wheel and you do not have to be a professional driver to be able to catch the rear of the car if it starts to slip, but it does help to have some experience. Vipers are known to bite their owners if they do not give it their respect, but this does not mean the car is dangerous, it just means you need to pay attention when aggressively driving the car. This is similar to how a driver expects a race car to behave. The handling truly is excellent, but there are no computer safety nets to save you if you push it too far.

Acceleration out of the corners is a lot of fun and once you get into the rhythm of the car and track, the Viper is a ball of fun on a road course. When we test these cars, we do not abuse them, and as such our acceleration times are not as good as what other magazines or professional drivers can achieve, but the 5.1 seconds it took to get from 0-60mph and 13.3 seconds for the quarter-mile are easily repeatable without hurting the car. If you look at the 5-60 mph time, which takes out the launching skill of the driver, the 4.43 second time is very good.

When on the track, the odd placement and size of the shifter can make finding the gears a little tricky at times, especially the 3-4 shift as the natural arm movement wants to bring the tranny back into 2nd, which would be really bad. Once the driver is used to it, it doesn’t seem to be a problem any longer. Even taking this into account, the Viper makes a great track day weapon and the ACR feels totally natural knocking out consistent lap times all day long. The Helena track is only 1.2 miles long and we typically knock out 4-5 laps at a time, which is not a huge stress on the brakes, and we had no issues with fade. A common upgrade for Gen 2 Vipers are the brakes, especially the ones in back, but for normal driving and medium to light track use, they seem to work fine. In 2001 Dodge did finally put anti-lock brakes (ABS) on the Viper and they were good enough to haul the car down from 60 MPH in an impressive 110ft.

For a pure Driving Feel car where money is not an object, and smooth roads or tracks are common, the ACR scores exceptionally high. But if harsh B roads are common and you are looking for high quality fit and finish for a decent price, the Viper ACR may not be the car of choice. It is immensely fun to drive and can be excellent on the track, but along with that comes a lot of unwanted attention, mediocre interior quality as well as fit and finish, and a fairly high price tag… but just look at the pictures, the looks alone almost make it worth the buy in price! 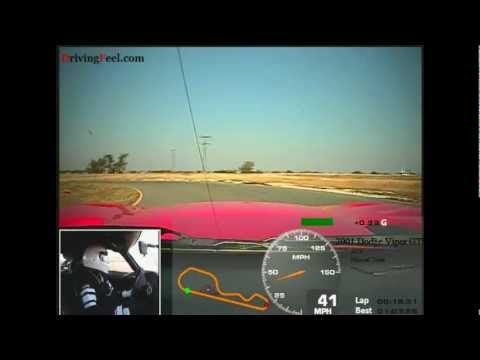