Back in 1969, Nissan introduced their 240z, known as the Fairlady Z in Japan and the Datsun 240Z in the USA, and promptly shocked the world with a great looking sports car with an inline 6, 4-wheel independent suspension, front disk brakes and other modern sports car features, for a fraction of the price of its competitors. The car looked the part and overall, performed the part of a competent sports car as well. The Z car quickly gained a following of avid enthusiasts and racers and the history of a very successful sports car family began.

Through the increased regulations of the 1970s, the 240Z changed into the 260Z, then the 280Z and ZX. The 280Z was the last iteration of the traditional 240Z look. The car continued to gain size and weight with each iteration, though improvements and more power came as well. When the 300Z and ZX rolled around, the car had changed into a more angular shaped sports car that had continued to grow in size, but a turbo was introduced to provide more power which really helped the situation, but as the 1990’s approached, a radical change had to take place in order for the Z to remain competitive in the sports car world market. In 1990, the new design emerged. The name remained the 300Z, but a new sleeker car stunned the motoring world once again. Internally it was known as the Z32 and it was drastically different than the Z31 that it replaced.

The car we tested here is a second year Z32, a 1991 300ZX with the normally aspirated 222hp V6 and 5-speed manual transmission. There was also a twin turbo version available from the get go that upped the horse power to 300 and provided serious sports car performance. The sleek new body still looks modern today and it was a drastic difference than the previous generation’s body style, though it was a bit more draggy aerodynamically.

Our Z32 that we located for our own fun for this test was painted red with dark grey interior. We found this car about 150 miles away and it had some recent work done including new timing belt and water pump, but for the most part, it had been sitting in a garage for a while and the owner needed it to go as he was moving. We struck a deal far below the asking price after taking it for a drive and determining it still needed some work to be done before it would be ready for the track. We did drive it the 150 miles and it made it, so that was a good start. Over the next month we performed some basic maintenance that included a four wheel alignment, checking the brakes, fluid changes, etc. but the more important part was the extra work that was needed which included tracking down a miss to some connectors on one of the injectors that needed to be fixed, redoing the leather on the drivers seat that was torn and hard, and perhaps the biggest benefit, replacing the drive shaft. The 300 came from the factory with a 2 piece drive shaft and where the two pieces joined there is a support bearing that holds it in place… unfortunately, it is very common for these bearings to wear out on this generation 300, and that is what happened here. What we originally thought was an out of balance tire, was indeed a worn bearing. Replacing the bearing actually was more expensive than replacing the factory two piece drive shaft with an aftermarket single piece drive shaft that saved about 15 pounds when it was all said and done, and the vibration was completely gone.

So with the car driving well and looking better after some good cleaning, we decided to go have some fun on the track! So off to Helena we went to our normal testing grounds.

We always like to measure the fuel mileage on the way over just to see what kind of economy the cars get on the highway. In Montana the speed limit is 75 MPH and we usually drive about 78 according to the speedo, which usually always read high. There is about 70 miles of driving on the interstate and then another 45 or so miles of two line roads with a 70MPH speed limit and with one high mountain pass on the way to Helena. Along this route the 300ZX was able to average 27.22 miles per gallon, which for a sports car is pretty good.

With the tank filled back up with premium fuel and the car humming along, we made our way onto the track on a nice sunny late summer day. The temps were pretty warm, getting close to 80 degrees at the peak of the day and the track was quiet and waiting for us!

The 300 is a fun car to drive as it is tuned for sporty driving with a firm suspension, but not rock hard like many super cars are these days. As the car is pushed it does become evident that there is the standard setup for safety with the built in understeer. The skidpad area at the Helena is always a bit slick and we have never received great marks with any car, and with some older non name-brand tires on the 300, it further hurt its performance and we were only able to achieve .82 G of constant rate grip. A new set of tires will go a long way to improve that performance.

The acceleration is about on par for a car that only has 222HP, which would be considered low for even a low end sports sedan in todays market, but it is not the amount of power that matters for entertainment, but how the car uses what it does have, just look at the Mazda Miata for proof of that theory. The same goes here, while this car is undoubtedly down from the factory new 222HP, the horsepower is easy and fun to use! The car had some issues hooking up at launch with the old tires so we had a fair amount of wheel spin and it only managed to get to 60MPH in 9.23 seconds and did the quarter mile in 16.90@83 MPH. It was able to beat a Miata and a Dodge Neon that we have tested, but not much else. Because of the torque, the car admittedly feels faster than our test results and is able to spin the tires at launch and even chirp them going into second.

The brakes are older school ABS and with the harder old tires, the combination did not work great. The 300ZX took a considerable distance to stop from 60MPH, 153 feet to be exact. Most modern cars will do it in about 120 feet. But the break feel remained firm and held up during lapping and during the brake test.

While the car didn’t really accelerate or stop very well, the car actually really comes alive on the track and it becomes apparent that it REALLY was designed as a sports car. The V6 sounds nice when pushed hard around the track and the steering feel comes alive, communicating whats going on quite well, though the steering effort might be a bit light. The car is well balanced and easy to place on the track which helps to make the car smooth, and as most racers know, smooth is fast! Keeping the car up in the right gear and in its powerband through the turns helps with acceleration out of corners, but with not a lot of power on hand, your best bet is to carry momentum as much as possible and stay smooth. This method allowed us to get our best times which easily beat a 2002 BMW 330i with sport package, but it was not enough to catch the 2006 BMW 330i with its higher horsepower and well balanced chassis.

Looking at a comparison between the track times of the 300ZX and that 2006 BMW 330i with sport suspension, the one noticeable spot where the 300ZX had the advantage was through turn 8 which is a sweeping left hand turn where balance and acceleration work well together. The 300 was able to carry a lot more speed and a higher G loading through that turn which allowed it to start with a much higher exit speed than the BMW. This allowed the 300 to reach the same top speed on the front straight that the BMW was able to reach and to actually have a quicker time through sector 1. Unfortunately, after that the BMW pulls away, which it should as it is 15 years newer.

We really found ourselves enjoying the 300 on the track, but a warning needs to be made about one discovery we made when I missed a downshift coming into turn 7 during hard braking and things got all crazy! The car entered into a beautiful drift around the turn and I thought I had caught it with opposite lock and was waiting for everything to hook back up and to counter-lock the other way, but when it did, it was violent and very hard and my feeble skills were unable to catch it and around we went (in the opposite direction). The harshness of the snap back caused us to explore a little more and repeat the process by messing around on the wide-open skid pad area and eventually after practice and time I was able to get to where I could catch it and was pulling off some decent drifting (power induced oversteer for you technical types), but you have to be ready and on your toes to catch it when everything hooks back up or you’ll end up spinning. You track rats out there should have no problem though.

Overall I like the car. It really does still look good, it sounds good, and its fun to drive in a sporting nature. With some proper tires on it, it’ll do even better. There are plenty of parts available for the cars, there is an enthusiastic group of followers that love them, and its a true sports car that could be had for not a lot of money. A well sorted normally aspirated version can be found for $5000-$6000. A turbo model is much more desirable and has some additional nice features beyond the extra horsepower, but a nice one could be twice what the non-turbo costs. Either way, you have a fun to drive real sports car that may eventually become a classic or even collectable car, I would even say for certain that the turbo version will be. 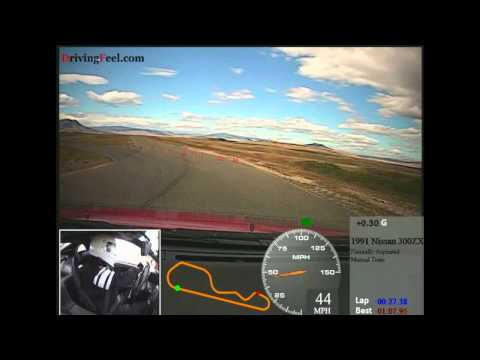