Yes, we are still in our infancy here, and yes, we are already reviewing our second BMW 3-series sedan. If you have not read our first BMW review, go ahead and do that here in order to get some background on what we are comparing this BMW to.

The 2002 330i sedan with Sport Package that we reviewed was a part of the E46 generation of 3-series BMWs and it was a delightful car to toss around on twisty roads and race tracks. The E46 was replaced here in the USA in 2006 by the E90 (or E92 if it was a two door coupe). The new E90/92 car was an evolution of the E46 which meant it grew some and it had redesigned exterior styling. The E90 has since been replaced by the all new F30 in 2012, but if you have been paying attention to the latest car magazines, you probably have noticed the F30 is not exactly loved when it comes to driving dynamics and there are some out there that have felt BMW has strayed too far from its roots and has forgotten how to make a true drivers car.

The F30 is too new for us to review around here, but we thought we would grab the universally loved E90 and compare it directly to the E46 and see what the differences were and to see how the car evolved trough that model change. To accomplish this we sought out a good example that would be similar to the E46 we had already reviewed. When the E90 330i came out in 2006 it was the top of the line standard 3-series model and it used a normally aspirated inline six that was a reworking of what was found on the E46 330i, but with 255 HP this time around. That normally aspirated engine was only available for a single model year and in 2007 the 330i was replaced by the 335i which had a twin turbo-charged inline six that generated 300 HP. We do not demand the engine with the highest horsepower in our preferred cars, but rather, we enjoy balance and drivability, especially on a track or mountain road. As such, we were not picky on whether we found a 330i or the 335i, and some here even prefer the normally aspirated engine over the turbo for its better throttle response and lack of turbo-lag. As it turns out, that is exactly what we found. A very nice 2006 330i with sport suspension and manual transmission, as well as some other non-performance related options. Another nice benefit of the 330i versus the 335i is that the demand for the turbo charged 335i keeps the prices at a premium over the 330i, making the 330i somewhat of a bargain.

One of the first things we noticed about the E90 version versus the old E46 is that it is a larger car. On paper it has grown a few inches in every direction, but from the driver’s seat, it feels considerably larger than even the stats indicate. With the larger size does come more comfort and the E90 trumps the E46 in comfort in just about every way. There are also a lot of additional comfort items and improved interior detail. Of course, the extra size and features on the new car all add up to a heavier car as well. Initially the feeling is that the car has certainly moved up in luxury and comfort, but we worried that this all happened at the expense of it being a true drivers car like the older 3 series cars of the past.

To further heighten our concern about whether the new E90 had lost its sporting way, we immediately noticed the weight of the steering is lighter than the older car which gives the impression that the steering feel on the newer car is not as informative as it used to be. We will mention that at least the E90 still has hydraulic power assisted steering versus the new electric power assist on the latest generation of 3 series (F30) which is notoriously lacking in steering feel. The initial impression was that the steering is light, but there was steel information being transmitted to the driver through the wheel. The sport steering wheel that comes with the sport package is thicker than the E46 wheel and fills the hand very well and provides an excellent tool to control the car with, a definite upgrade over the E46. Though we thought the radio controls felt cheaper than the ones on the E46 sport steering wheel.

With the optional sport suspension that came equipped on this car, the ride height is lowered about an inch over the standard suspension as well as having firmer springs and more aggressive tuning. While the ride is certainly stiffer than the standard 3 series suspension, it is not uncomfortably stiff… at least not to us. The ride is very compliant and with the short and stiff sidewalls on the tires, you do feel some harsh crashing over bumps and potholes, but the ride still received excellent marks. While the lighter steering concerned us at first, we were more than satisfied with the feel and feedback that the car provides when the driver starts to push it. The steering comes alive and there is plenty of information being passed through the suspension telling the driver exactly how much grip, and more importantly, how much control they still have. While the car is larger than the previous version, it is every bit as tossable on the race track. There is some body roll but it is very well managed and while the lighter steering weight causes some loss of steering feel when compared to the E46, it in no way hampers the car.

We thought that we might break the .9 G barrier on the skid pad, but the continuous state lateral grip came in just shy at .88G. We do admit that our skidpad is always a bit slick due to some light dust that always seems to be there. Out on the track we had several turns where the peak G’s reached during the turn were only a few hundredths shy of 1.0 G (.98 and .97). Above all, the car was extremely confident and easy to drive on the track and for overall handling, we give the car very high marks as it was well balanced and is fun and easy to drive. When a car is easy to drive fast, as this one is, it allows novice drivers like us to come closer to the actual limits of the car and it allowed us to push harder than we would in say the Dodge Viper we tested. Even with the stability and traction control completely disabled, the car never provided a scary moment to any of the test drivers, even when doing a four will drift with the throttle floored coming through turn 6 on what turned out to be the fastest lap. Because it was so easy to drive it allowed us to get within 1.74 seconds of the Viper, holder of our current fastest lap on the track. The difference is that we are not sure we’ll be able to improve a lot on the time of this BMW, but we know there is a lot more capability left in the Viper, it is just much more difficult to get to it. The BMW was brilliant on the more technical parts of the track, such as the tight esses at turns 2,3 and 4 and especially turns 5 and 6, and this is where the car really made up time.

The engine is very smooth and provides a nice wide torque band that provides for acceptable acceleration. Our normal driver who does the acceleration tests was not available, so our quarter mile time of 15.84 at 90mph is not as good as it could be. Nor is the 7.39 second time to 60mph. Remember, we try very hard not to abuse the cars we test, but there is certainly more performance than our acceleration tests show. The shifter on the E90 is night and day better than that on the E46. It is a delight to run through the gears both up and down and while the pedal spacing isn’t ideal, there is a bit too much space between the break and throttle, it is good enough for acceptable heel-toeing for those so inclined. The clutch pedal works well and the throw is not too long and it is fairly light which allows for smooth and easy gear changes. We are just delighted that BMW continues to offer the manual gear boxes in their sport sedans, at least for the time being. This gearbox was new for 2006 and it has an extra cog over the E46 we tested, six versus five. The extra gear was never used on the track, but it did allow us to get over 30 MPG on the highway which we considered very respectable for the performance you get.

The sport seats in front have high bolsters that do very well at holding the occupants in place during hard cornering. It does need to be mentioned that for Americans, the seats might be a bit narrow. They fit all of us great, but we are all fairly small here and we had a few larger occupants complain of the tight fit in the hips. The interior is a nice step up over the E46 and is better in every way, but it does come at a cost in both price and weight.

When it comes down to it, the balance of the car is just right for a sport sedan. It looks very good, can haul 4 adults fairly comfortably, and can even squeeze a fifth in there if needed, but yet it still is able to let its hair down and have a great time driving some twisty mountain roads. For those that may be just starting a family and would like a family car that allows you to still have a great time driving, the 2006 BMW 330i with sport suspension and manual transmission makes a great “compromise” car and has a great driving feel to it. You can pick them up reasonably priced, but maintenance costs on German cars is always high, so be aware of that. Beyond that, we say pick one up and have a blast! We did… 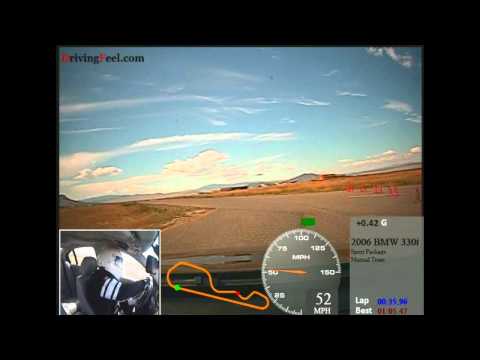